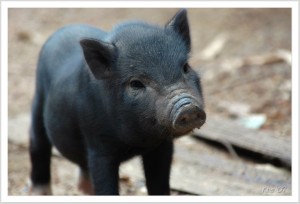 While I am not one to usually push the animal rights aspect of a Vegan Diet - (I push the medical benefits instead) - I DO care about animals and hate to see any living thing mistreated.

Of course some people think that this is their sole purpose in life - to feed us.

But I think that they forget (or ignore) the fact that these animals are living, breathing, beings just like us.  And many of them are very intelligent.

Did you know that a pig is actually smarter than a dog?  And has an equivalent intelligence to a 3yr old child?

So why bring this up now you ask?

My wife and I were spending a quiet New Year's Evening at home and I switched on Netflix to watch an episode or two of Mike Rowe's Dirty Jobs.  I love the show, and his reactions and commentary crack me up.  In this episode Mike was at a Pig Farm in Iowa.  Definitely a dirty job and was amusing as ever - until they clipped the baby pig's teeth and tails.

All newborn baby pigs have 8 needle-like teeth that they clip - with wire cutters.  Same with the tail.  The idea is that when pigs are raised in confinement they tend to bite each other - tails especially - hence why they do the clipping.  But with wire cutters?  Ouch!  From the way they were squealing you can't tell me these babies don't feel pain.  No anesthetic, no nothing.  Mike asked the farmer about any pain and the farmer said they were more scared than hurting.  Yeah - right.

Then came the shots.  All baby pigs can become anemic pretty quickly so they get an Iron Booster shot.  Of course if these babies were left to root around outside like nature intended, they would get all the iron they needed from the soil.  Not so in factory farming - they get a shot.

Lastly they got a shot of antibiotics.  I knew this was coming because according to a report by the FDA, approximately 80 percent of all antibiotics used in the United States are fed to farm animals.  I have never been to an actual factory farm - but from what I have seen in the media and on the net - they are so filthy it's no wonder the animals get so sick, practically swimming in their own pee and poo.  And of course any bite wound would get infected pretty quickly.  This is why chickens get debeaked as well.  So they get an antibiotic shot.  It's in their food and water as well.  And then we eat them - (well some do - thankfully not us Vegans).

Hormones, antibiotics, pesticide sprayed GMO Grains, and God knows what else, is my #2 Reason toBecome Vegan.  I simply do not want to eat that - and you know most standard grocery store meat is from factory farms.  Same with fast food.

But here's the thing that finally got me.  WHERE  they got the shot.

What A Pain In The Neck

Why?  Because the neck area is the least consumed part of a pig - (except for sausage maybe).

Ah - so we finally get down to the bottom line - GOTTA SAVE THE HAM!  Yep - gotta protect their 'investment' and make sure they don't damage the expensive part.

It all comes down to the mighty dollar.

But it brings up a good question - how does a tiny needle  injection damage the surrounding muscle?  If an iron or antibiotic shot is distributed in the blood stream,  you'd think a little needle mark wouldn't matter - especially as these baby pigs have quite a bit of growing yet to do.

Makes me wonder if there's something else we don't know.

In Case You're Wondering

Anyway - yes I still like Dirty Jobs.  I still like Mike Rowe.  I know this is common practice amongst pig farmers.  And I know that (hopefully) most factory farms are trying their best to provide good, quality, food to feed the world.

I also know that for many people, as long as they get their BLT Sandwich, they just don't care.  After all - they're just pigs.

But for me - I'm an animal lover and this just reminded me of another reason to become vegan.

« Why Becoming Vegan Has Made Me Weird
Forget Viagra - Eat Plants »