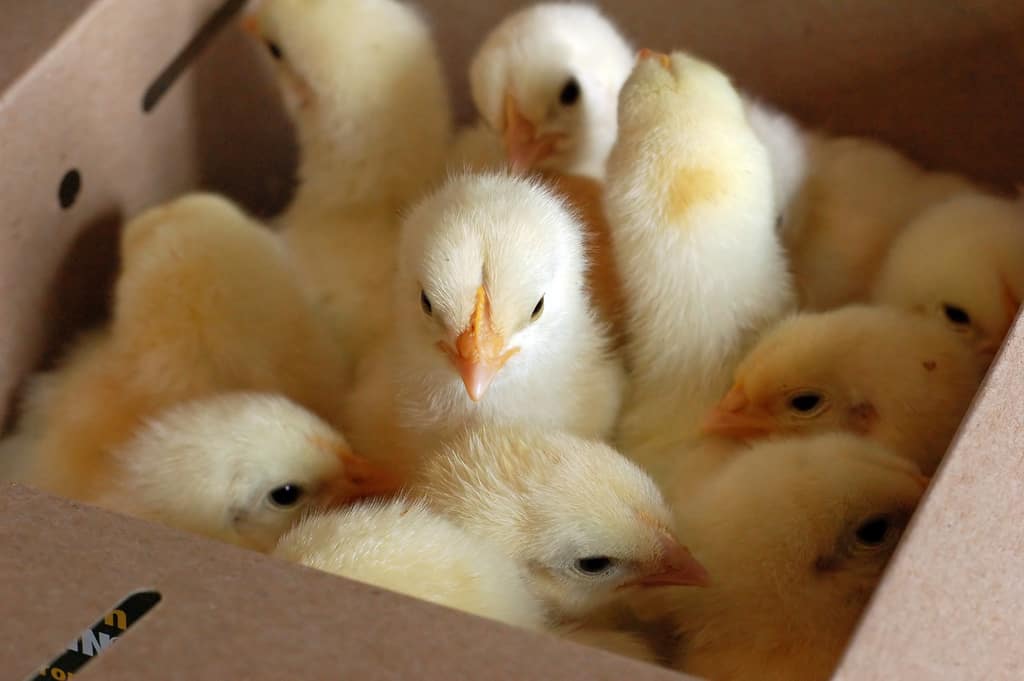 If you were to give 2 chickens to every man, woman, and child in the United States …. that’s how many chicken wings that Americans eat every Super Bowl Sunday.

In fact, if the wings were laid end-to-end, they would circle the circumference of the planet more than twice, which is about a quarter of the way to the moon.

600 MILLION Chickens are killed……IN ONE DAY …….  just so we have enough wings!

Why?  Because a bunch of guys are going to play a game, and we’re all going to watch … and drink beer and eat chicken wings.

Is this CRAZY or what?!

Now I usually don’t watch ANY sports on TV at all – but I will admit I love football as much as the next guy – Go Colts!

But still….am I the only one who sees how insane this is?

“This year, according to the National Chicken Council (yes this exists) experts estimate about 4% MORE chicken will be ‘produced’ compared to last year thanks to lower feed costs.”

Chickens raised for their meat, or ‘broilers’  in chicken industry speak, spend their entire lives in filthy sheds with tens of thousands of other birds.  With that kind of crowding and confinement – there is massive amounts of disease.

They are bred and drugged to grow so large so quickly that their legs and organs can’t keep up.  Heart attacks, organ failure, and crippling leg deformities are common. Many become crippled under their own weight and eventually die because they can’t reach the water nozzles.

When they are only 6 or 7 weeks old, they are crammed into cages and trucked to slaughter.

Laying hens are crammed together in wire cages so tight they don’t even have enough room to spread their wings.

Chickens are normally clean animals, but because they are crammed so closely together, they are forced to pee and poo on each other, oh and the tip of their beaks are cut off so that they won’t peck each other to death.

After their bodies are completely worn out and their egg production drops, they are shipped to slaughter.

Think of these poor girls every time you open that can of chicken soup,  as their flesh is too bruised and battered to be used for anything else.  Maybe canned chicken too, or Cat food.

So much for the ladies.

Because the male chicks can’t lay eggs,  and are not bred to produce a lot of ‘meat’ for the industry…… they are just killed.

Every year, more than 100 million of these baby boys are simply tossed into garbage bags to suffocate, or sent through a grinder.

And who are some of the biggest contributors to this mass killing?

Mayonnaise companies.  You see mayonnaise takes a lot of eggs, but to get more eggs – we need more layers.  So even more chickens are ‘produced’ just to give us the mayo eggs.

But that means more guy chickens will be produced too.

The chickens that DO survive this nightmare are slammed into small crates and trucked to the slaughterhouse.   Hundreds of millions suffer broken wings and legs from rough handling, and millions die from the stress of the journey.

At the slaughterhouse, they are shackled, hung upside down, their throats are cut (maybe) , and then they are dunked in scalding-hot water to remove their feathers.

What many people don’t realize, because there are no animal cruelty laws for these poor birds, almost all of them are still somewhat conscious when their throats are cut, and many are literally scalded to death in the feather-removal tanks after missing the throat cutter.

Without a doubt, chickens are the most abused animal on the planet.

In the United States, more than 7 billion chickens are killed for their meat each year.

That’s 1 chicken for every living person on the planet.

Another 452 million hens are used for their eggs.  And 99% of these animals spend their entire life in total confinement—from the moment they hatch until the day they are killed.

I know people have to eat – I get that.

But people like us KNOW you don’t have to eat chicken to survive.

Sadly, the majority of people out there still insist on eating meat – specifically chickens,  because they think they’re a ‘healthier’ source of protein.

The good news is, as more and more of us adopt this lifestyle (vegan or plant-based), the more we can make a difference and put an end to this madness.

In fact –  Germany has become the FIRST country in the world to decide it no longer wants to grind up millions of baby chicks.