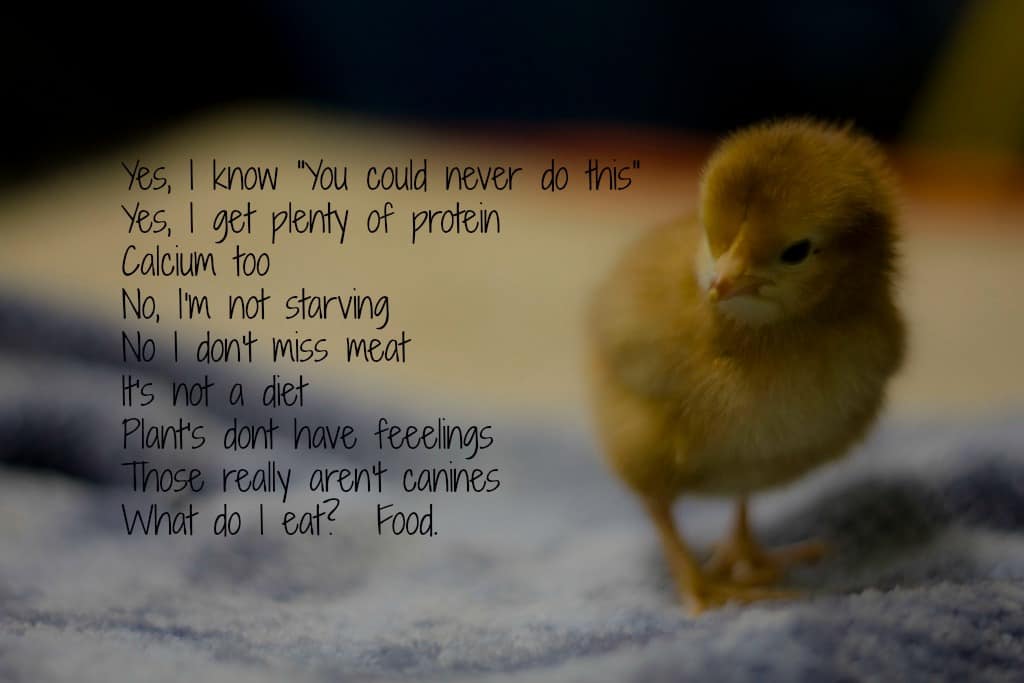 Once you stop eating meat - you'll hear just about every excuse in the book why it's not practical or healthy, so prepare yourself.

"I could never be Vegan, I like my meat too much"

"We have Canines - we were meant to eat meat!"

"I had a friend who went Vegan and got really sick"

We have become so programmed by TV Commercials, magazines, and billboards -  that we actually believe that "Beef, It's What's For Dinner", or that "Milk, It Does a Body Good".

Your best defense against these Top 5 Excuses for Not Going Veg?

Educate yourself with as much information as you can on why a Whole Foods, Plant-Based, Vegan diet is the healthiest diet on the planet.

I Tried Going Vegan Once And It Made Me Sick

You can eat nothing else but French Fries and Diet Coke and call yourself a Vegan...

And you'll eventually make yourself sick too....

You have to be smart about it and eat the right foods .

Whole plant foods - like Fruit, Vegetables and Starches, and stay away from the processed junk food - even if it IS labeled 'Vegan'.

Sometimes people are so out of shape that even if they DO start to follow a healthy Vegan Diet - they won't feel that good.  In fact, they may even start to feel worse.

This could simply be a detox time as your body adjusts to get rid of all the accumulated toxins.

Good stuff in - bad stuff out.

And when I say - "get rid of" -  I mean by any means it can…. throwing up, diarrhea, flu like symptoms, whatever.  Your body is not picky and doesn't care which orifice it uses.  It's GOING to get rid of that stuff  - anyway it can.  🙁

It's not pleasant, but it usually passes pretty quickly, and THEN you'll feel amazing.

Sadly a lot of people will see this as a sign something's wrong, and quit.

Just hang in there, it will get better.

I Need My Protein 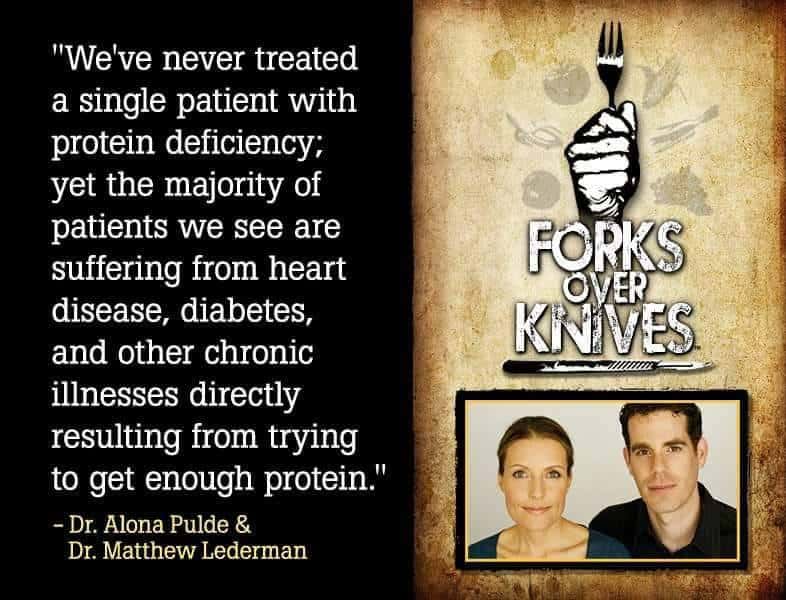 But look around you.  ⅔'s of Americans are overweight and ⅓rd of them are obese.

Do you really think we have a protein problem as a society?

If you’re eating enough calories, and eating a variety of whole foods, you will get all the protein you need.

Even potatoes have protein.  And don't worry about combining your proteins which was made popular in the 1970’s.  That's old news and has been debunked many times.

Know this:  there has never been a documented case of protein deficiency.

The only way you can become protein deficient is if you starve yourself.

Plants Have Feelings Too

Plants don't have brains or nervous systems with which to feel pain.  (And they don't usually scream when you pick them.)

Does this mean that we can say with absolute certainty that plants cannot have a consciousness or feel pain? I suppose we can never be 100 percent certain....

The animals we eat are conscious.

And they most certainly do feel fear and pain, especially when they are being boiled or dismembered alive, something that all too often happens in Factory Farms.

I Was Raised To Eat Meat

I think most of us were.

Just because it’s the ‘way it’s always been done’ or ‘it’s what humans have been doing for centuries’, is not much of a reason to continue doing something, especially if it's been proven to be bad for you.

Insanity is doing the same thing over and over again, but expecting different results.

Red meat is high in saturated fat (which clogs your arteries), and there’s also evidence that processed meat, such as bacon and hot dogs, increases your risk of cardiovascular disease and colorectal cancer.

Old habits die hard - but they can be changed.

We Have Canines So We're Meant To Eat Meat 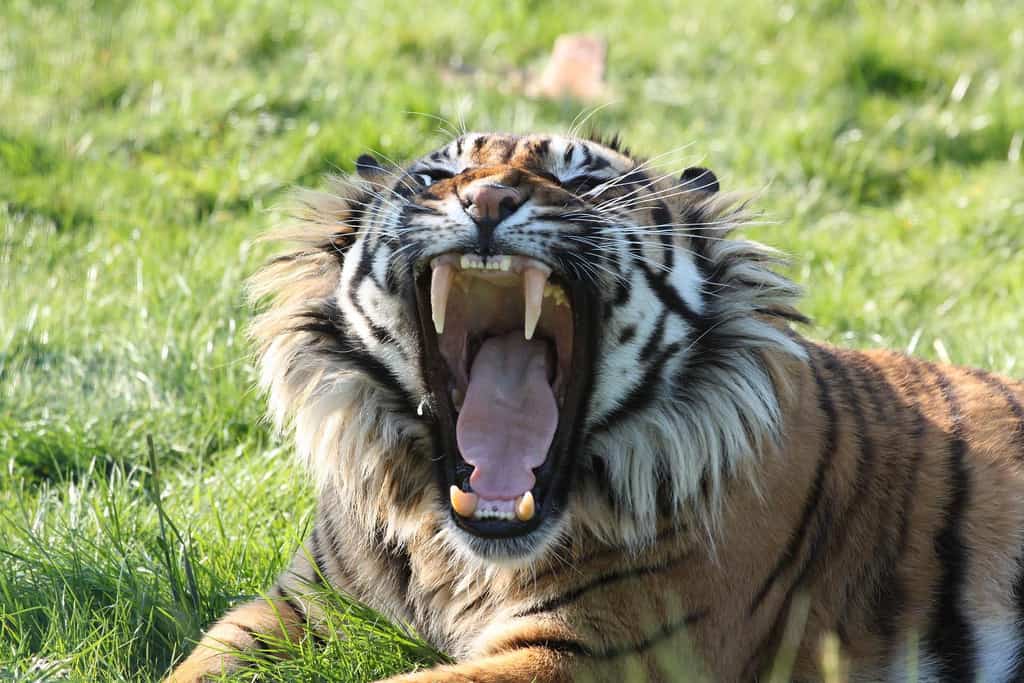 That sounds logical because we do have 4 pointy teeth.  But - human canine teeth much more closely resemble the canine teeth of horses, hippos, elephants and gorillas, all of which happen to be plant eaters.

But have you ever look inside a tiger's mouth?  Their pointy teeth are just a wee bit  sharper than ours.  The reasons they're so sharp is so they can catch, kill, rip, tear, and eat the flesh right off their prey.

Can you do that?  With your pointy teeth?

The only thing we seem to be able to tear into is Burger King.

And I'm sure for every one of these excuses, you'll hear 10 more.

People LOVE to find reasons to continue their bad habits.

Sadly, it usually takes something drastic, like an illness or trip to the hospital to get people to change.  And sometimes even then they won't.

Just realize that there are more and more studies coming out every day that point to a plant-based vegan diet as the healthiest diet on the planet.

All  by eating the right food.

So don't let these excuses deter you.  Stay the path and you'll soon see what so many of us already know.

No excuses.  Just do it.

« 5 Ways to Save Money by Going Vegan
Baked Vegan Hushpuppies »