Home » Articles » Why Becoming Vegan Has Made Me Weird 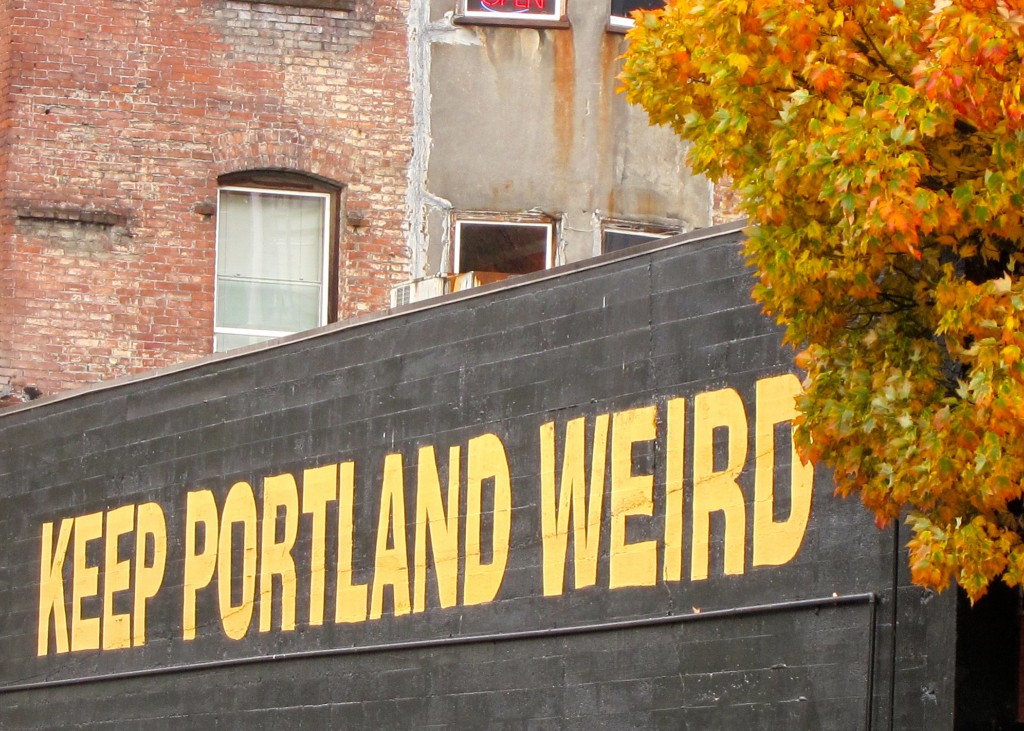 Since becoming Vegan years ago, I do things I NEVER in my midwesternm meat-eating life thought I'd do…..

Like shop in the yuppie vegan food stores, or spend more time in the produce aisle than the meat aisle, or actually get excited about searching online for new recipes to try.

And then there was the time we bought a pre-packaged Tofurky Dinner for thanksgiving….

But we won't talk about that.

So I guess becoming vegan has made me weird…  as if I wasn't weird enough already.

But that's ok - weird is the new cool.  And if being weird keeps me being healthy - then I'm ok with it.

How weird am I?  Here are a list of things I do now practically every day that would once upon a time make me stop and pause.

I guess it's a good thing I live in Portland…..

If you would have told me 10 years ago that one day I'd be eating Tofu, I would have laughed in your face and probably snorted Mt. Dew out of my nose.  Tofu?  Yeah.....right......sure.....um okay.........Heck I'm not even sure I knew what Tofu was back then, let alone weird things like Miso, Tempeh, Soy Curls, or especially Seitan.

And speaking of Seitan..... I mean really guys???  SEITAN???  You couldn't come up with a better name than THAT?!  People are going to think I have upside down crosses or something.....

Nope - no flippin' way.  I was a strict Midwestern meat & potatoes kinda guy so none of that hippie, yuppie, healthy crap for me.

And Nutritional Yeast?  What the holy heck is THAT?  Isn't that something you buy in one of those vitamin stores along with your green seaweed powder….?  That's just pure craziness!

Have you ever tried my BBQ Soy Curls?  Or my Seitan Beer Brats?  They're really quite good….

I Cook Complete Dinners From Scratch

Not only do I LIKE Seitan - I make my own.

In fact, today I cook ALL of my meals and hardly anything I buy is processed.

Every meal I make now is completely from scratch....just like grandma used to do back in the day.  I know to some people it's like a 4 letter word ....cook.  But I love it.

Not only that - when I am in the store picking up staples - I actually read the nutrition facts on the label….  I know right?

Whole foods as in real unprocessed  foods you eat - and also Whole Foods as in that hippie store I swore I'd never set foot in.

Whole Foods is kinda spendy, but you got to admit they have one heckuva produce section.  Of course mine is about 30 minutes away, so I normally shop closer to home.

But believe it or not, I don't shop at my local grocery, which is just 5 minutes away.  Why?  Because they're just as expensive as Whole Foods and honestly - I guess they're just not weird enough.

I mean they hardly carry any of the weird-ass hippie ingredients I've gotten used to!  So I drive an extra 10 minutes to the neighboring town's grocery store.

So I guess I'm supposed to do what other guys do.

You know, like playing golf, or watching the game, or polishing a gun, or at least playing the latest FPS....

But instead I'm setting up placemats and napkins so I can take a good picture of those Cauliflower Tacos to post on my food blog.

Oh, it doesn't bother me that much, as I'm not really into sports, or guns, or video games anyway.

I have found that there is a real sense of community in the plant-based world.   People actually caring and trying to help each other.

Besides - one day maybe I'll be able to say, "Move over Guy Fieri, there's a new Food Network Star in town."

Yeah and maybe I'll have my own line of cookware too.

Oh and by the way - I DO like Game of Thrones so don't take away my man card just yet....

I Wrote a Cookbook And I Brag About It

Me?  A writer?  And of all things a COOKBOOK?

But since my wife handed over the apron and I had to start cooking....  things just kinda naturally ended up that way.

Oh in the beginning my recipes weren't anything to write home about - far from it.  But slowly.... gradually.... as I began to learn how to use all these new weirdo ingredients.....  the food started to actually taste good.

Did my taste buds change or did I all of a sudden become a good cook?   Both I think.  And judging from the hundreds of amazing comments ....  I think you agree.

So a cookbook was really the next logical step.  Well that and the fact I had over 10,000 people at the time all begging for one....

And so Brand New Vegan: Soups, Stews, and Chili was born.

And did I mention I'm even published in a magazine too?  I still have a hard time wrapping my head around that one.

So I Guess It's OK To Be Weird

Mandy Hale said it best when she said, "I'd rather be a nerd than follow the herd".

And where is that herd heading?

It's the path millions of Americans will take this year..... the path to sickness, disease, and maybe even death.

All because they're unwilling to give up their meat, cheese, and processed foods.  And because most doctors still don't have a clue that it's the food that's causing most of our problems.

The obesity, the diabetes, the heart attacks.....  yeah it's the food.

So, I'll BE that weird Vegan guy and they can laugh all they want.   I may be the weird one - but I'll be the HEALTHY one.

And that's perfectly fine by me.

Wanna be weird with me?  Come join us!  You'll fit in just fine 🙂