Not only is this a VEGAN Sweet Potato Casserole – there is absolutely NO butter, coconut oil, or any other kind of madness in it either!  Just pure Sweet Potato goodness!

And with this my friends…… my Thanksgiving just became very happy. 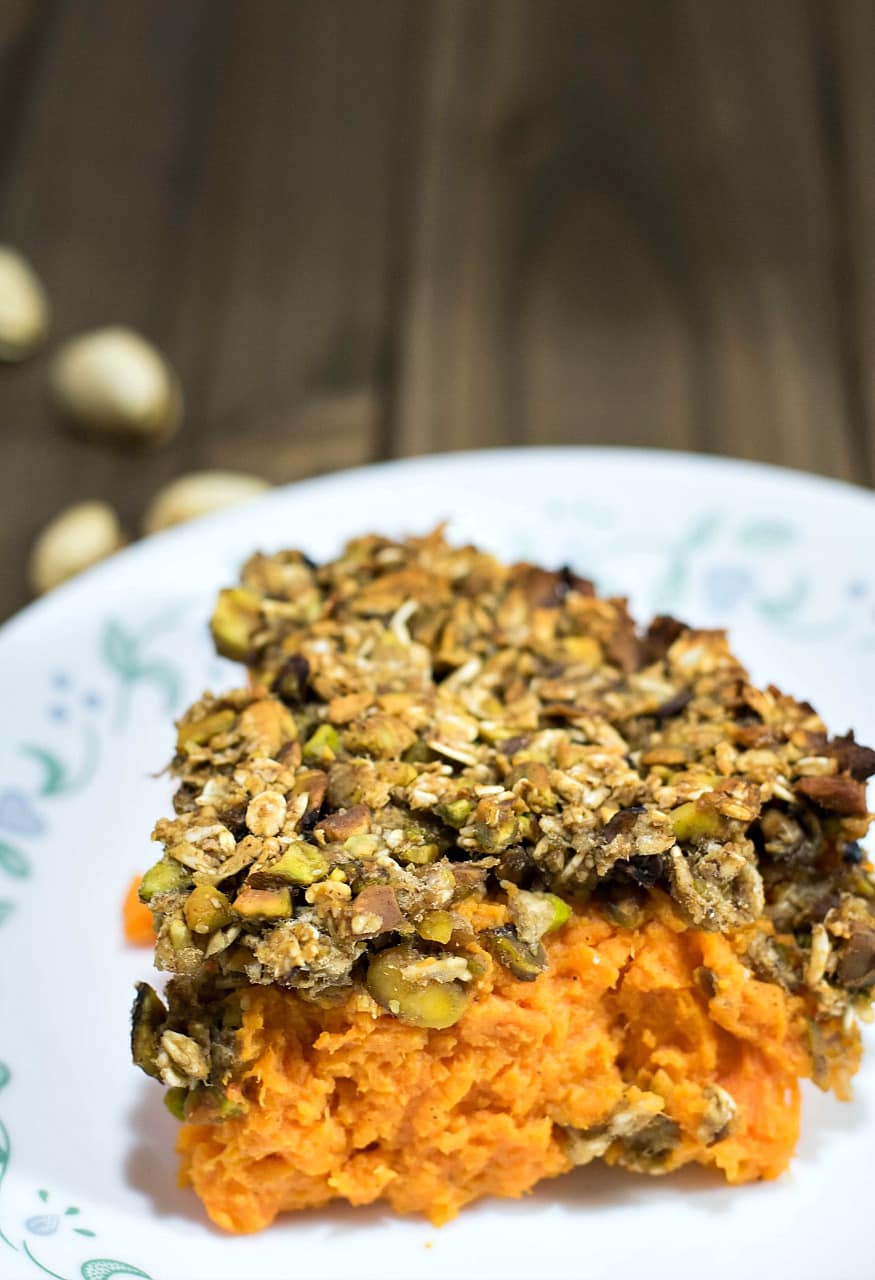 Sweet Potato Casseroles are usually absolutely loaded with butter, milk, or even coconut oil, which is simply one thing… a lot of FAT!

Oh and let’s not forget the traditional topping either!  I think if I see one more casserole with a marshmallow top I’ll scream.  Can you say processed sugar AND gelatin?

No, I knew from the beginning I wanted something different.

And after that very first taste, well let me tell you something right now….

THIS is the Sweet Potato Casserole you want to make this Holiday Season!

Not too sweet, absolutely no butter or oil, and a crispy, crunchy topping made from healthy rolled oats and pistachios.

Traditionally, pecans are used to make all kinds of holiday toppings, if not an entire pie.  And ounce for ounce, pistachios are way healthier.

For starters, they have a bit more fiber, over 3x the potassium,  twice the protein, fewer calories, and a lot less fat!

It’s the same when you compare them to walnuts too, another holiday favorite.  Fewer calories, less fat, and a whole lot more of the good stuff.

So it was really a no brainer to use pistachios for this casserole compared to any other nut.  And trust me, when you mix the salty crunch of pistachios with the creamy sweetness of sweet potatoes……….  ah, it’s a match made in heaven.

Of course, some people are going to have nut allergies or will want an absolutely zero fat recipe.  In this case, you could simply double the oats or leave the topping off completely.  Another idea would be to place sliced bananas on top and then sprinkle with oats.

Regardless, I think it’s time I quit yammering and get on with the recipe…..right?

So without any further ado…..I give you my Vegan Sweet Potato Casserole. 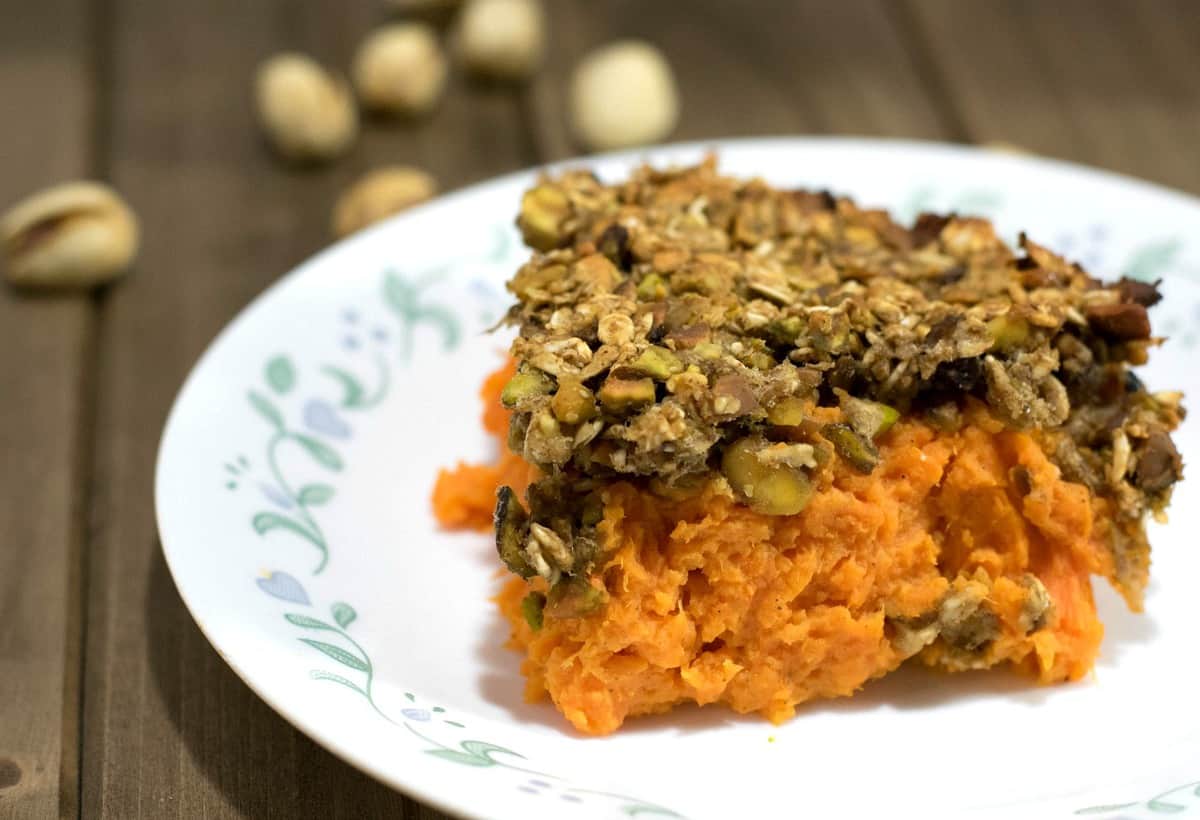 Start off by peeling and cubing 5 large Sweet Potatoes.  And by Sweet Potato I mean the Red ones (YAMS) not the white ones.  Remember to make the cubes about the same size so they cook evenly.  Add these to a large pot of cold water and give it a generous pinch of salt.

Heat the potatoes on high just until they come to a boil, and then let them cook for 10 minutes.

Remove from heat, drain, and then return the potatoes back into the pot.

In a small measuring cup, add ¼ cup Unsweetened Almond Milk and 1 tsp Lemon Juice and mix well.  Then add ½ tsp Salt,  ½ tsp Cinnamon,  ½ tsp Vanilla, and 1/8 tsp Nutmeg.   Mix well with a whisk and then pour this into the pot with the potatoes.  Mash until smooth and creamy.

Spoon the mashed Sweet Potatoes into a large casserole dish and smooth out the top.  Set aside for now.

Roughly chop 1 cup of roasted, salted Pistachios.  We don’t want the nut whole, and we don’t want flour – so somewhere in between.  Add the chopped pistachios to a small bowl.

Meanwhile, briefly chop 1 cup of Rolled Oats as well.  I used an old coffee grinder and just pulsed a tablespoon or two at a time.  Again, we don’t want Oat Flour, just broken up a bit.  You could use a food processor as well.  Add this to the bowl with the pistachios.

Finally, slice a whole banana and add to the crumb mixture.  Using a fork, mash the banana and stir it into the topping.  It will eventually form a sticky, crumbly topping that will create a nice crust for our casserole.

Crumble the topping onto your sweet potato casserole (I used my fingers).  Be sure and cover the entire surface, and then gently mash it down evenly with your fork.

Mmmm,  there you go.

From my home to yours, let me be the first to say Happy Holidays! 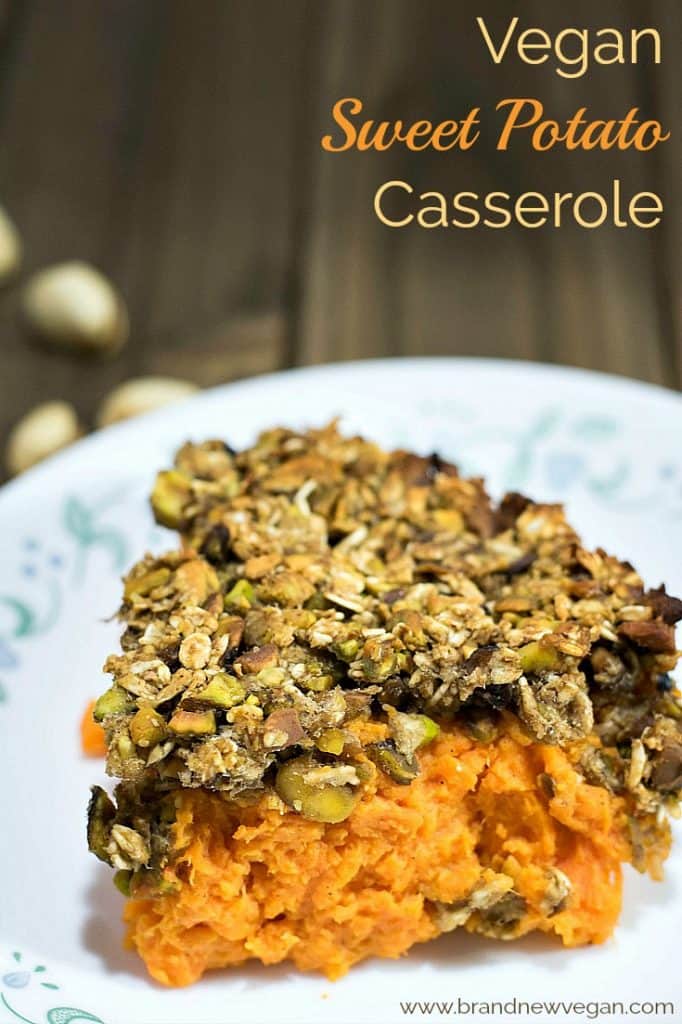