Ok all you menfolk out there, this recipe is for you.  One of my readers sent me this recipe for Brat and Broccoli Casserole that she makes for her plant-based husband, because she was having a hard time finding foods that would keep him satisfied and on track. 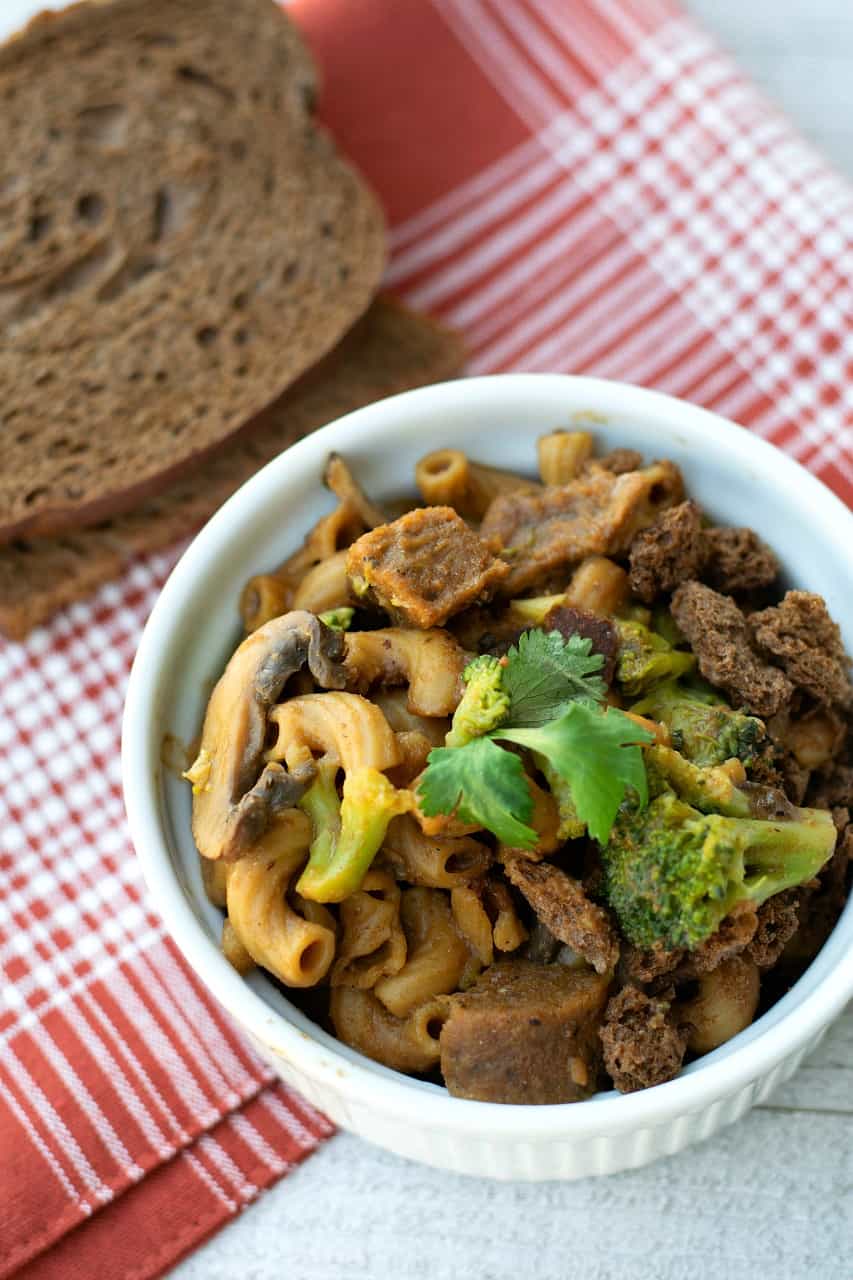 The whole recipe might seem like a bit of work, but once you've made the Brats, the rest of it comes together pretty quickly.

I'm serious about that gravy!  This is going to make a nice addition to my Octoberfest Recipes!

Yes, she used beer and many of you have asked about substitutions in the past.  Let me just say that the Dark Stout that I used gave it an entirely new dimension of flavor.  Yes, you can just sub extra veg broth, but you'll be missing out on something truly special.

Rich
Thick
"Beefy"
And so satisfying!

I've seen it time after time, where my female readers are beside themselves trying to get their carnivore husbands to at least TRY our food.

They're not picky exactly, it's just that they just don't want to eat sprouts, or tofu, or any of our sometimes weird "vegan" food.

Who says plant foods are boring? 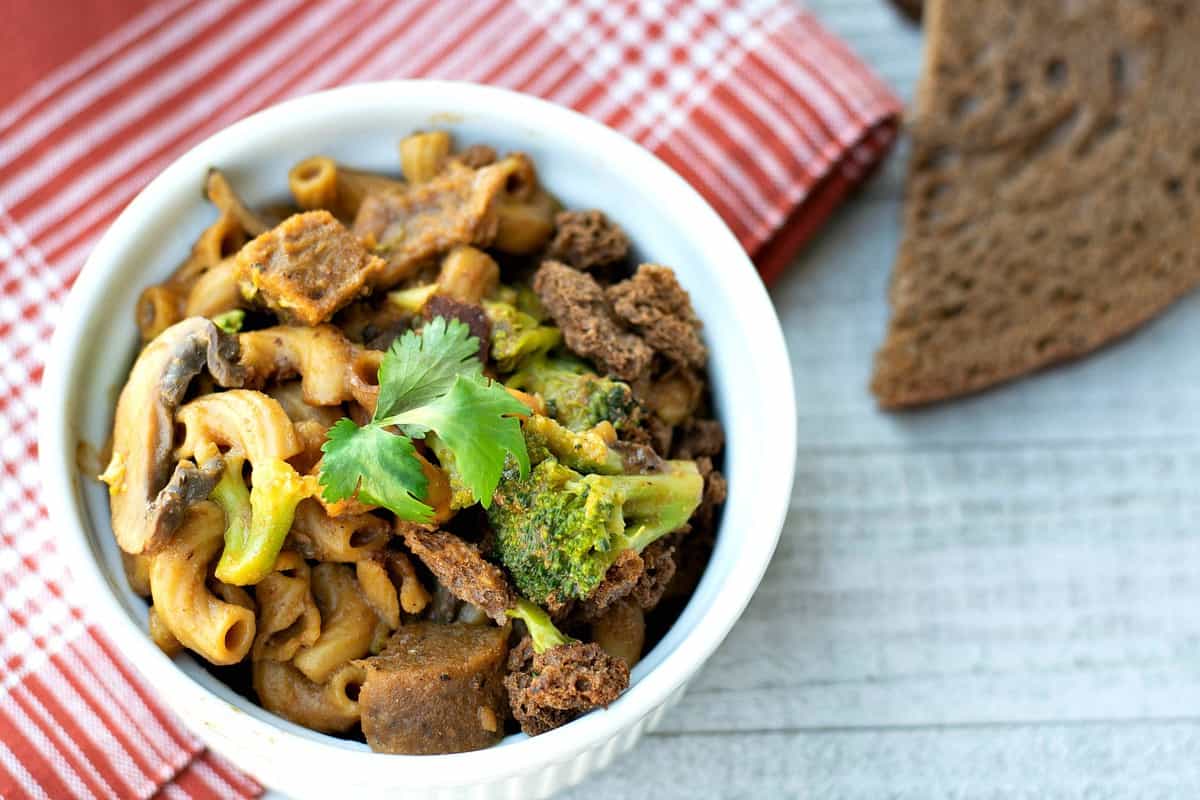 To begin, make a batch of my Vegan Beer Brats.  Click the link for the recipe. This recipe will make about 5 brats, and you only need 2 or 3, so you'll have a few extra to throw on the grill tomorrow or just to snack on.

Once the brats are steamed, take them out of the steamer and let them rest.

Oh, and you can definitely wrap them in parchment paper first, before wrapping them in foil.

Whisk all the dry ingredients together to mix well, then toast them in a large saucepan over med-low heat.  We don't want it to burn, just to start smelling like there's toast cooking in the toaster.

Then we add the veg broth and beer.

As I said, I used a Dark Stout (like Guinness).  Any dark beer will probably work fine.  I personally used a stout from a Brewery here on the West Coast of Oregon called Pelican Brewing.

Finally, add the soy sauce and some sliced Portabella Mushrooms and let it thicken.

Actually, any kind of short pasta will work fine.  I used Whole Wheat Macaroni but I think Brown Rice Pasta would work too.  But seeing how Vital Wheat Gluten is a key ingredient in the brats - this is NOT going to be a Gluten Free recipe.  Sorry.

Once the pasta is cooked, drain it and rinse it with cold water.

Pour the mixture into a casserole dish and top with some Rye Breadcrumbs.  I toasted 2 or 3 slices of a Dark Rye Bread and crumbled it up on top for the breadcrumbs.

Cover (again with parchment paper and then foil) and bake in a 350° oven for 35 minutes.

Remove the foil and paper and continue baking for an additional 10 minutes.

Now I will say this makes a LOT of food.  My friend likes to BATCH COOK, so this will definitely leave leftovers to freeze for another dinner.

And there you go.

I just want to say thank you Linda, for a lovely recipe and if any of you would like a recipe featured, send me a text or IM on Facebook.  I'll be glad to take a look! 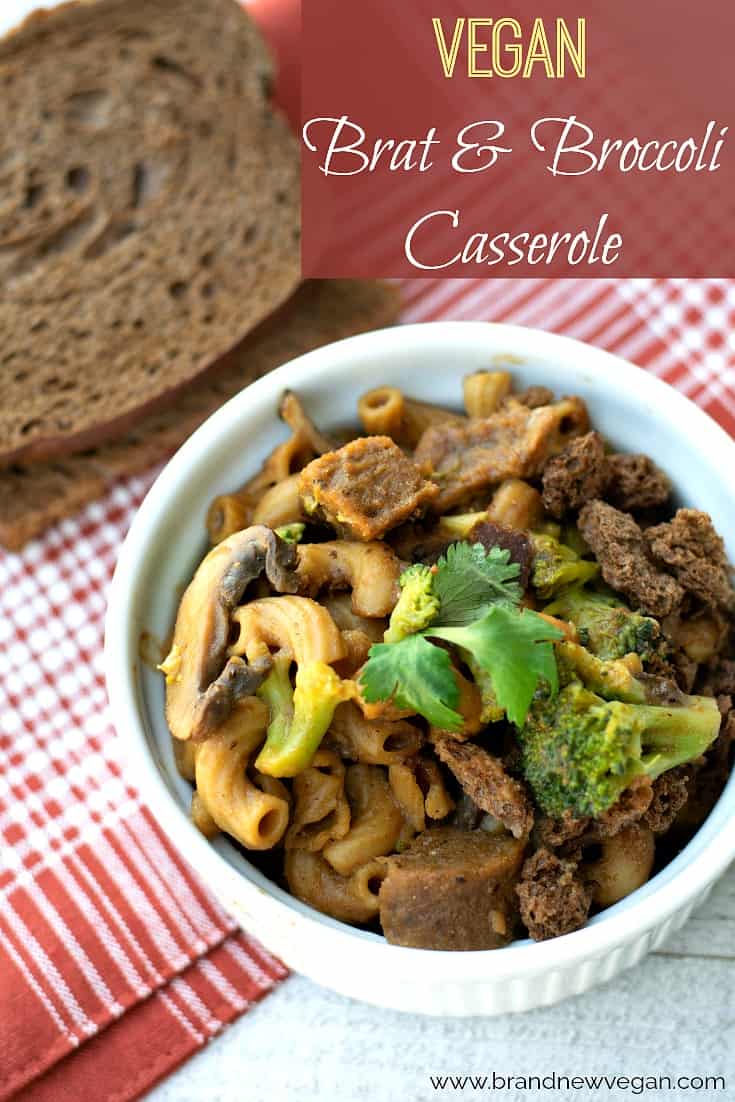 A rich and satisfying casserole for those menfolk out there who want something a little more hearty. Beer Brats, Macaroni, and Broccoli come together in a Dark Stout Mushroom Gravy that will surely please the pickiest eater.

« Who Is Brand New Vegan?
The SAD American Diet »