When it's 103° outside, what do you do?  You pull out the Instant Pot for a quick and tasty dinner, like these Salsa Verde Soy Curls.   Roasted peppers, fresh Tomatillos, and Soy Curls were simply meant to go together!  You're going to HAVE to taste this to believe how good it is!

Move over chickens, your days are numbered. 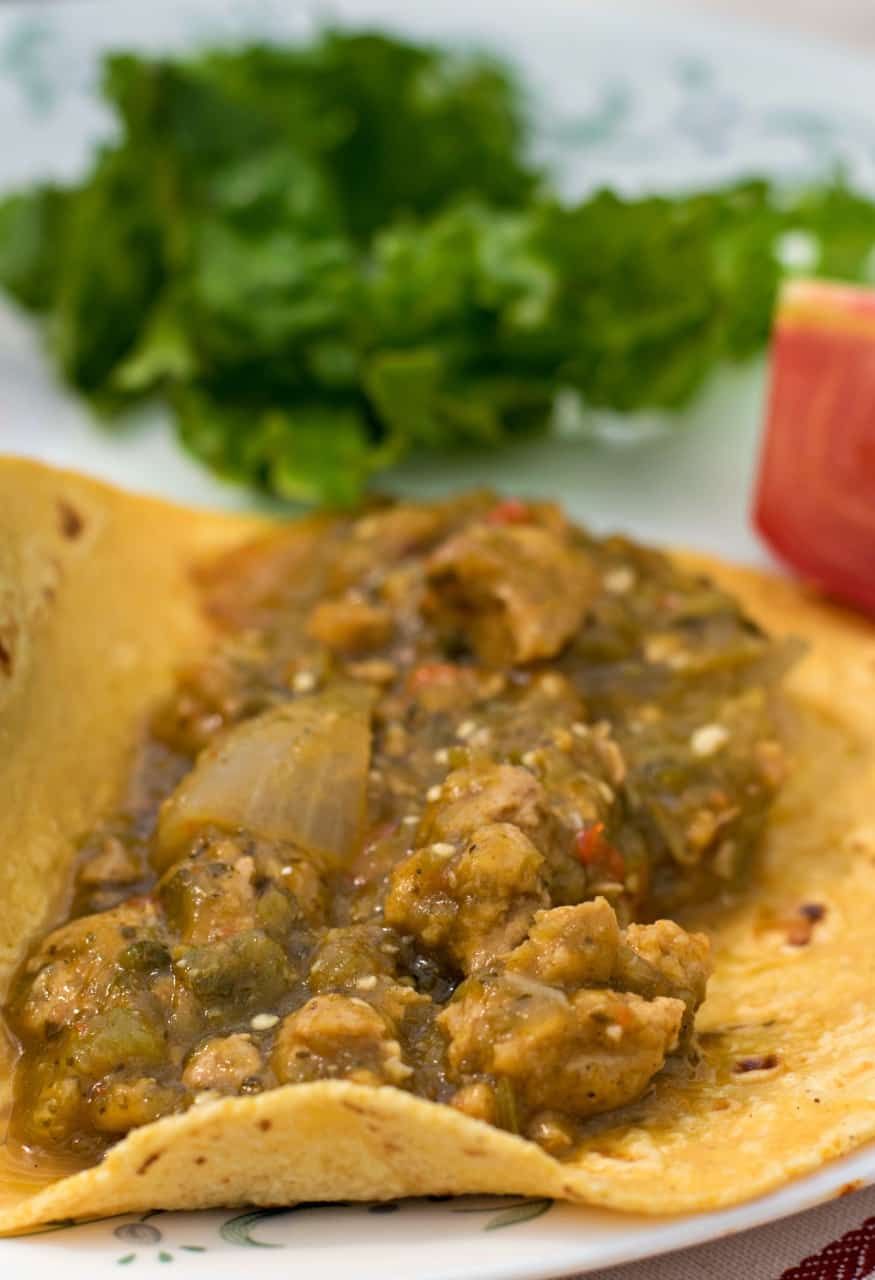 I know, how can you roast peppers when it's so hot outside.  Easy, I used my toaster oven!  And if you don't have one, you could simply fire up that old grill.  We're just looking to put a little char on some tomatillos and a few peppers.

And no, this is NOT hot.  Trust me, my wife does NOT do spicy, but with this - she gobbled up 2nd's.  Of course if you LIKE spicy, well we can fix that too 🙂

This is seriously an easy recipe....while my peppers were roasting I had my Soy Curls soaking.  Meanwhile I was chopping up my other veggies directly into my instant pot.  Then I added my roasted veggies and set it to MANUAL for 5 minutes.

A quick blend with an immersion blender (or into a regular blender) makes the BEST Salsa Verde you've ever tasted.

Toss in the drained Soy Curls and set your IP for another 5 minutes and dinner is ready.

First we're going to remove the papery husk on 6 Tomatillos.  Cut them in half and then arrange them on a cookie sheet.

Next, cut off the stems from a Green Bell Pepper, a Poblano Pepper, and a Jalapeño.  Cut each pepper in half and remove the membranes and seeds.

Careful - you might want to wear gloves - those seeds contain an oil that will seriously burn your eyes.

After 10 minutes, flip the veggies over and broil another 10 minutes.  Again, timings are approximate - keep watch, we just want a little char....that's it.

Meanwhile, while the peppers are roasting, add 3 cups of dried Butler Soy Curls to a large bowl.  Add just enough hot water to barely cover and stir in 2 Tablespoons of Low Sodium Soy Sauce and 1 tsp of Poultry Seasoning.  Give that a good stir and set aside.

While all that's happening, peel and chop 1 onion and add it directly to your Instant Pot.  Also add ½ of a Red Bell Pepper, 6 large cloves of chopped garlic, an 8oz can of Chopped Green Chiles, and 1½ cups of Low Sodium Vegetable Broth.

When your peppers and tomatillos are finished roasting, toss them in too.

If you like your food SPICY - add the whole jalapeño......otherwise just use half.

Attach your IP lid, make sure it SEALED, and set the timer for 5 minutes on MANUAL mode.  After the timer goes off, either let it vent naturally or do a quick release (use a wooden spoon and be careful) to vent the steam.

Stir in a ¼ cup of packed, chopped cilantro, 2 tsp of Ground Cumin and ½ tsp salt and mix well.

Now we'll add those Soy Curls.  First, drain them and squeeze out as much water as you can.  Then, if you like your 'chicken' shredded, give them a quick chop, otherwise toss them directly into your IP and Salsa.

Give that a quick stir to mix, and then re-attach the lid, make sure it's set back to SEALING, and cook for another 5 minutes on MANUAL.  Again, either let it manually vent when it's finished or very carefully do a quick release.

Remove the lid and squeeze in the juice of 1 lime (about 2 tablespoons).

Good huh?  Now grab those oil free corn tortillas and have yourself a feast.

Serve with your choice of tortillas.  Garnish with shredded lettuce, chopped tomatoes, or slices of avocado.  Goes great with my Instant Pot Spanish Rice and/or Instant Pot Refried Beans.

Here are some convenient links to some of the products I used in this recipe.

Note:  All links are Amazon Affiliate Links, meaning I will receive a commission for every purchase.